Hey, kids, guess what? I’m not actually dead! It just happens that I’ve been tagged by not one, but two of my favorite bloggers in an already-busy month. But… of all the kinds of busy, this is the bestistest. This week, we’re just going to start with the one, but come back next week because we’ll have some more awesome stuff. 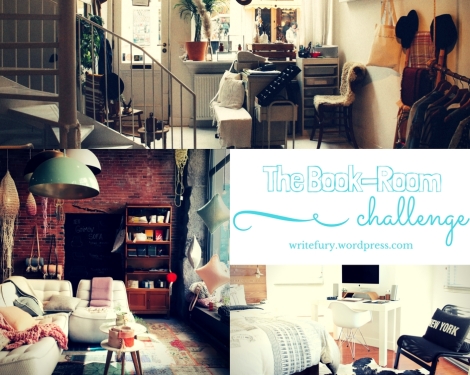 First, the one and only Blank Mastermind genius (thank you, writefury!) has tagged me for the Book-Room Challenge, which will be fairly self-explanatory.

We have an order of events tonight. First of all, the rules.

Then the tag. I had a little trouble deciding what approach to take; should I write the rooms as if they were from palaces and villages in fantasy worlds, or should I write more modern rooms with fantastical flavor? I was up for a challenge, so I chose the latter.

A foyer in an old Victorian house. The floor is marble, with an old Saxon tapestry as a rug. Several mahogany chairs line the blue walls, and several white Hellenic statues line the far wall. One stained glass window is over the door, and overhead hangs a chandelier with lit candles. Smells like winter and history books.

A boathouse by a river. An old sword from the Civil War hangs above the doorway. Several raincoats hang on pegs and boots sit on the worn pinewood floor. Two floor-to-ceiling windows let in the grey morning light. There are no chairs, but a large wooden table is at the center with some books on it, and the whitewashed walls are covered with old maps, navigation charts, and flags, and at the far end of the room hangs a huge painting of a royal flagship.

Aaaaand…. I didn’t plan to tell everyone about this project quite yet, but now is as good a time as any other. I am writing a speculative/scifi/dystopian novel. Yes, it will probably be finished within the next five years. No, you may not read it yet. Thank you for asking. Its working title is…

A dark, sad living room splashed in golden light. The walls are dark blue-grey and the floor is faded tile, but it’s brightened by yellow lamps, a soft rug, and a warm fireplace that smells like burnt coffee. The walls are decorated with what looks at first like paper chains, but are really metal chains painted bright colors.

Mismatched chairs surround the fire: several metal folding ones with cartoon character blankets, one kitchen chair with a quilt-pattern cushion, and a recliner with a laptop bag sitting beside it. Several important-looking folders are stacked on the table next to a box of crayons.

Because it’s the only Shakespeare play I really enjoyed. (Lately I’m watching The Hollow Crown version and loving it- maybe I’ll talk about that later this month.)

A small office/meeting room. The floor is black carpet with red and white geometric shapes. One wall is covered with a bookshelf with Latin-sounding books; another has a huge whiteboard scribbled over with charts and lists of names. At the center of the room stands an oaken table, and in the middle is an old faded Risk board game.

Now for the tagging of bloggers, which is where I usually break the rules. Not on purpose- I’m just can’t always find people who haven’t already been tagged. This time, though, I might be able to get by…

And there you have it. That’s all for now, so enjoy another October week complete with hot cocoa and rich descriptions. 🙂

7 thoughts on “The Book-Room Challenge”